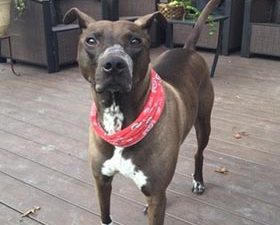 The lymphatic system may not be the most well-known among body systems, but it’s one of the most important. Lymph nodes, lymphatic fluid and lymph vessels help filter fluids, fight infections and remove toxins, among many other functions critical to a dog’s immune system.

Cancer that originates within the lymphatic system is called lymphoma or lymphosarcoma (LSA). It is the most common cancer seen in dogs, with 20 to 100 cases per 100,000 dogs. It also is treatable though typically not curable. Early detection is important, because lymphoma in dogs can spread to bone marrow and internal organs. It can also spread to the skin and/or the lungs, although those instances are less common. Among the more visible signs to look for are enlarged lymph nodes, but they can swell from other causes, too, so a visit to the veterinarian is in order before any presumptions are made.

Causes of lymphoma in dogs  can be multifactorial.  Sometimes lymphoma can be genetic, other times environmental and still sometimes we do not know why a canine succumbs to this disease.  Dogs stricken with lymphoma tend to be older, and certain breeds — including Golden Retrievers, Boxers, Scottish Terriers, Rottweilers and Bullmastiffs — seem to develop lymphoma more than others. A dog’s sex does not appear to be a factor

There are different cell variants of LSA. They are classified by what type of white blood cells are affected (B cells or T cells) and the size of the cells (possibilities include small cell, intermediate cell or large cell lymphoma in dogs). Different forms of lymphoma also may present differently:

Signs Of Lymphoma In Dogs

Many of the symptoms displayed if a dog has lymphoma can also be symptoms of other issues. For instance, unexplained weight loss, a decrease in appetite, increased drinking and urination, lethargy, and vomiting and/or diarrhea can all have multiple causes. Lymph nodes can swell for reasons other than lymphoma, such as from infections or tick disease. And a lump may even be a noncancerous fatty lipoma rather than a swollen lymph node.

As a caring pet parent, you can check your dog regularly for lumps or bumps, keeping notes about their size and location so that you’re aware of any growth or shape changes. Areas that you can check for small lumps that might be swollen lymph nodes include:

Lymphoma in dogs also can result in an increased respiratory rate with more shallow breaths being taken. Some dogs with lymphoma may display a pot-bellied appearance. In the relatively few cases when lymphoma spreads to the , it can present as reddened regions or ulcers or can appear as big, flaky white crusts.  In the mouth, lesions resembling hyperemic (very red) gingivitis or periodontal disease may occur.

Since many of these clinical signs could represent a different issue, your pet should be examined by a veterinarian to determine the cause.

To determine the cause of a dog’s symptoms, a veterinarian typically will perform a complete physical examination, including bloodwork and urinalysis. If lymphoma or any other type of cancer is suspected, additional procedures can include three-view chest X-rays and an abdominal ultrasound to determine whether there are tumors or whether the cancer has metastasized (spread). If enlarged lymph nodes or the presence of a mass in the chest are among the symptoms, a fine needle aspiration may be performed to draw a sample of the  tissue for further testing. Occasionally, a biopsy may be needed. At times, specialized tests (flow cytometry, PARR test) may help further characterize this disease into B-cell lymphoma or T-cell lymphoma.

If lymphoma is diagnosed, it will be important to determine the stage to which the cancer has advanced. This information is critical for treatment planning.

Lymphoma in dogs should be considered a systemic cancer, and treatment options thus typically target the entire lymphatic system or even the entire body. This is in contrast to, for example, surgery to remove a tumor from a specific location. Still, there are a number of options that may put the cancer in remission and/or improve your dog’s quality of life and extend your time with him or her:

Chemotherapy is the prevailing  treatment option for canine lymphoma.   There are a number of chemotherapy protocols all varying based on the number of treatments needed, the type of lymphoma (small cell, large cell, etc) and a pet parent’s personal choice.  Chemotherapy is  typically is administered intravenously but on occasion can be given orally in the form of pills. About 85% of dogs will go into a remission with treatment. Most dogs tolerate chemotherapy well but about 15% of them will have side effects. These could include nausea, vomiting, diarrhea and/or a reduced appetite. Side effects usually begin within the first four days of treatment and can last for four days. Most dogs will not lose their fur, although breeds with fur that is more hair-like can (Poodles, Bichon Frises, Terriers, etc.). After undergoing chemotherapy, dogs often do well for six to 12 months, depending on the type of lymphoma and the chemotherapy protocol used. If the lymphoma is a small cell variant, which is less aggressive, a dog could do well for a year or two.

In instances of localized lymphoma where treatment can be focused on a specific area, such as with nasal lymphoma, radiation has been successfully used. There are two primary types. Conventionally fractionated radiation therapy (CFRT) typically consists of 16 to 18 treatments. A more innovative version, Stereotactic Radiation, is much more targeted form of radiation while greatly sparing the surrounding tissues.  It usually requires just one to three treatments, sparing your dog several additional times of being subjected to anesthesia.

The PetCure Oncology team is highly qualified to provide stereotactic radiation therapy. With either type of radiation, a dog may experience side effects similar to sunburn on their nose (or other treatment site). However, dogs do not experience the side effects seen with chemotherapy — although concurrent chemotherapy may be recommended depending on the stage of lymphoma.

There are very few places in the country that perform transplants but it’s an option.

If other treatment options are declined, a corticosteroid called prednisone can be used to help slow the progression of cancer. This may lead to your dog drinking more water, urinating more, being hungrier and having increased panting. Prednisone can help to kill some of the cancer cells, making the enlarged lymph nodes smaller.  This drug typically helps for two to three months or so. In instances where it’s used as part of a chemotherapy protocol, it should not be started before chemotherapy.

Lymphoma is a progressive cancer. If all treatment options are declined, the disease can progress quickly. Within weeks, it’s possible to see coughing, breathing difficulty, anorexia and severe lethargy. At that point, decisions based on a dog’s quality of life will have to be made.

Find A PetCure Oncology Location Near You

PetCure Oncology provides innovative treatments for canine lymphoma and other types of cancer. What’s more is that caring for your dog isn’t just our business — it’s our passion. We are here because we want to provide a good quality of life and extend your time with your dog as much as possible. Along the way, we’ll demonstrate professionalism and support at all times.

For more information about PetCure Oncology and our treatment options, find a location near you today.

Types of Cancers in Dogs

If your dog is displaying any symptoms of cancer or has been diagnosed with cancer, sort below by cancer type or tumor location to learn more about the most common types of cancer in dogs and available treatment options. Click on the links for more specific information on treatment and real patient stories.

Round Cell cancer in dogs