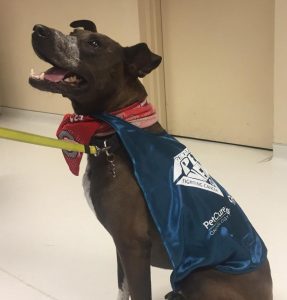 Lung cancer is not a common disease in canines. In fact, it only accounts for about 1% of all diagnosed cancers in dogs. However, this may change in the future, as there has been a noticeable rise in cases. Several factors may be at play for this increase in lung cancer in dogs, including better diagnostics and the possibility that canines are being exposed to more carcinogenics. Ironically, better healthcare for dogs may be another reason. Dogs are living longer, and it is these older canines who are more likely to develop lung cancer.

If your dog has lung cancer, you may or may not notice any symptoms. Approximately 25% of canines with tumors in their lungs will be symptom-free. Other dogs may have one or more of the following symptoms: difficulty breathing, weight loss, lethargy, decreased appetite and/or coughing.

Depending on the type and size of the cancer and whether it has spread, it is possible to treat lung cancer. Some of the options you and your veterinarian may want to consider include surgery, chemotherapy and radiation therapy.

The most common form of this disease is metastatic cancer. This means that the cancer originated in another part of the body but has now spread to the lungs. The other type of lung cancer is primary lung tumors. This type of cancer originates in the lungs but can spread to other lung lobes and lymph nodes inthe chest cavity and the also the bones.

Bronchogenic adenocarcinoma is the most common primary lung tumor, making up 75% of cases1. Dogs can also develop squamous cell carcinoma or sarcomas in their lungs as well. As primary lung tumors are typically slow growing, they can become quite large before they are finally diagnosed.

The only factor that seems to make a dog more likely to develop lung cancer is age. This disease is most often found in canines who are ten years or older2. Other factors, such as the sex and breed of the dog, do not seem to affect a canine’s risk of developing lung cancer.

The following are some of the symptoms of lung cancer in dogs:

If the cancer has spread, some dogs will have symptoms that may appear to be completely unrelated to the lungs. For example, your pet may have lameness, swollen limbs or a general malaise.

It is also possible that your dog may not exhibit any symptoms at all. Some owners, in fact, will learn that their beloved pet has a mass in their lungs only after their dog has had an X-ray for an unrelated condition.

If your vet suspects that your dog has lung cancer, the following diagnostic tests may be performed:

If the lung tumor is a solitary mass, your veterinarian may recommend that the portion of the lung where the disease is located be surgically removed. Fortunately, most dogs do well with this type of surgery. If a CT scan shows that the cancer has spread to the thoracic lymph nodes or other lung lobes, surgery is not recommended.

Stereotactic radiation (SRS/SRT) — which is an advanced form of radiation therapy — is a newer, non-surgical treatment option for dogs with primary lung tumors. It delivers precise doses of radiation directly to the tumor, which results in less damage to healthy tissue. Most canines require only one to three of these treatments, and there are, fortunately, very few side effects. The ones that do occur are typically mild and may include a sunburn-like effect on the skin and inflammation in the lung tissues.

When it comes to lung cancer in dogs, life expectancy depends on several factors. For example, a dog that has a small primary lung tumor surgically removed may live an average of 12 to 16 months or longer, if the disease has not spread to the lymph nodes3. On the other hand, if the disease has spread to the thoracic lymph nodes, the dog will likely enter the final stages of his or her life in approximately two months.

Stereotactic radiation can slow the progression of primary lung tumors in dogs who cannot have their growths surgically removed.  This modality has been showing good success for pets, reducing the need for a serious surgery.

If the tumor is left untreated, it will continue to grow and have a negative impact on the quality of a dog’s life.

If your dog has been diagnosed with lung cancer, we encourage you to call one of our team members or find a PetCure Oncology location near you. We understand how frightening a cancer diagnosis can be, so we have made it our mission to provide pet owners with the best treatment options possible.