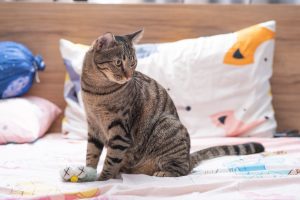 Breast cancer is typically an aggressive cancer in cats. While it is treatable, especially with early detection, recurrence at some point is the norm. Fortunately, mammary tumors in cats typically don’t develop until a cat is 10 or older. Even better, breast cancer in cats that were spayed before they were 6 months old is relatively rare: having your cat spayed that early means she is to develop mammary tumors.

No particular breed is more susceptible. Notably, male cats can develop breast cancer, too, but it’s rare. Certain circumstances can play a role in those unusual instances. A male cat could face increased risk if he is on medication that contains estrogen, for example.

One of the most visible potential signs of breast cancer is a lump (or multiple lumps) on your cat’s belly. However, lumps can have multiple causes and should not automatically be presumed to be cancerous. Fatty tumors called lipomas, for instance, are benign. This is why you should have you veterinarian perform an examination if you find a lump or suspect cancer for another reason. Your veterinarian may already palpate the mammary glands during routine physical exams, since mammograms are not performed for animals. Even if a lump is discovered and it turns out to be breast cancer, treatment can extend your cat’s life and enhance her (or his) quality of life, depending on the cancer’s stage and whether it has spread.

An overwhelming majority of mammary gland tumors in cats are malignant (cancerous) — about 95%. Types of tumors include:

Symptoms Of Mammary Cancer In Cats

Lumps that could indicate breast cancer might develop on the underside of a cat’s belly anywhere from near the front legs to the groin area. That’s because cats have eight mammary glands, with four on each side. Larger tumors usually indicate a more aggressive cancer. A large tumor also could stretch the skin so much that it becomes ulcerated, in which case a cat might lick the area, providing another sign.

Lymph nodes also could be enlarged if the cancer spread, particularly the nodes in the axillary region (under/behind the front legs) or inguinal area (groin). Cancer can strike a single mammary gland or multiple glands. If the cancer has progressed, other signs might include weight loss and/or lethargy and, eventually, a poor appetite. Even if a cat has a good appetite, the other symptoms can occur because cancer competes with healthy cells for nutrients. If the cancer has spread to the lungs, a cat’s breathing may be more rapid or shallow, as well.

Several of the tests used to determine whether a cat has cancer, including breast cancer, are fairly standard. They include bloodwork (chemistry and a CBC — complete blood count) and urinalysis. To determine whether cancer has spread to the lungs, chest X-rays are needed. An abdominal ultrasound may be ordered. If a mammary mass is detected on palpation of the mammary chain, a veterinarian will want to order a biopsy to make the most accurate diagnosis. Tests on the removed tissue help determine exactly what type of cancer the cat has and what the course of treatment might include.

Because recurrence is likely with breast cancer in cats, the primary goal of treatment is to maximize the time before it returns. It could be months to a couple of years, depending on treatments and how aggressive the cancer is.

Mammary carcinoma in cats is aggressive, so the ideal treatment is a radical mastectomy surgery, which entails removing the entire chain of four mammary glands on the affected side. In some instances, the breasts on both sides may be removed. This is called a bilateral radical mastectomy. The simultaneous removal of lymph nodes in the underarm (axillary) area and groin (inguinal area) is typically recommended, as well.

Rarely are feline mammary tumors benign, but these noncancerous tumors also can be removed. Otherwise, they could grow enough to impact a cat’s quality of life.

Chemo is often intravenous but there are oral versions as well. Cats handle chemotherapy well, with only about 10% of them having adverse reactions. These may include an upset stomach, nausea or diarrhea within the first four days. These side effects typically resolve within four days.

Radiation is not typically used to treat cats with breast cancer, but it could be beneficial in rare circumstances. The two primary types are conventionally fractionated radiation therapy (CFRT) and Stereotactic Radiation. A typical CFRT regimen includes 16 to 18 treatments. Stereotactic Radiation, an innovative alternative, usually can be completed in one to three treatments. The team at PetCure Oncology is highly qualified to provide stereotactic radiation therapy.

As with other cancers, the aggressiveness of the tumor and whether it has spread is the key factor in the prognosis for a cat with breast cancer. With treatment, a cat may be cancer-free and live her normal life for six months to a couple of years. If the cancer metastasized to the lungs or if the cat has an inflammatory carcinoma or adenocarcinoma, however, he or she may decline within a matter of months. If a cat parent opts for palliative care with no treatments, the cat’s quality of life and remaining time are determined by how aggressive that cancer is and whether and to where it has metastasized.

Find A PetCure Oncology Location Near You

PetCure Oncology treats cats with many types of cancer. Our use of innovative treatment methods such as Stereotactic Radiation is evidence of our passion and commitment to your cat’s health and quality of life. For more information about PetCure Oncology and our treatment options, find a location near you today.