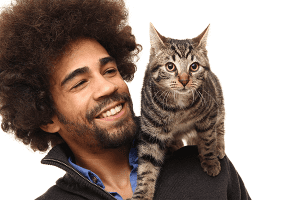 Lymphoma is a cancer of the lymphocytes, which is a type of white blood cell. It is the most common cancer seen in felines, and it accounts for about 30% of new cancer diagnoses in cats. Some of the most common areas of the body that can be affected by this cancer are the gastrointestinal tract, chest cavity, liver and spleen and bone marrow.

Depending on where the lymphoma is occurring in a cat’s body, the symptoms and signs can be varied. They could include a loss of appetite, lethargy and, in some cases, difficulty breathing.

If the lymphoma is left untreated, a cat’s survival rate is about four to six weeks after diagnosis. With chemotherapy treatment, however, approximately 75% of cats with feline lymphoma will go into remission, with the median survival time being about six to 12 months.

Types of Lymphoma in Cats

A cat’s sex or breed do not seem to be factors in whether he or she will develop lymphoma. Age, however, does seem to be a factor, with most affected felines being about 10 to 12 years old. An exception is mediastinal lymphoma. Cats diagnosed with this type of lymphoma are typically young, with an average age of five years at the onset of the disease. Mediastinal lymphoma has also been linked to the feline leukemia virus (FeLV) though any form of lymphoma can be associated with FeLV.

The following are some of the most common forms of this cancer and the locations that they can affect:

Symptoms of Lymphoma in Cats

The clinical signs of this disease will vary depending on the location of the lymphoma. In addition, many of the symptoms of lymphoma are ones that are commonly associated with other illnesses and conditions that can affect a cat. Therefore, diagnosing lymphoma can be difficult.

The following are some of the more common symptoms:

Depending on the type of lymphoma that is suspected, your veterinarian may order the following tests:

Additional testing — including flow cytometry or PARR analysis — may also be ordered. Your veterinarian might also refer you to a board-certified veterinary oncologist who will have the expertise necessary to treat feline lymphoma.

The most common treatment for lymphoma is chemotherapy, with 50% to 70% of treated cats going into remission. Though uncommon, some cats will experience side effects from this treatment — including nausea, decreased appetite, vomiting, diarrhea and possible loss of their whiskers.

Some solitary forms of this disease, such as nasal lymphoma or mediastinal lymphoma, can be treated with radiation therapy. The most advanced form of radiation treatment is called stereotactic radiation. It precisely delivers high doses of radiation to the tumor, which greatly reduces damage to the surrounding tissue.

Stereotactic radiation requires only one to three sessions versus 16 to 18 doses of conventional radiation therapy. In some cases, concurrent chemotherapy treatment may be recommended.

If an owner decides against chemotherapy treatment, his or her veterinarian may prescribe prednisolone, which is a corticosteroid, to slow the growth of the cancer. In some instances, prednisolone may be used in addition to chemotherapy.

What is the life expectancy after treating lymphoma in cats? It depends on myriad factors — including the type of lymphoma and how quickly the cat was diagnosed and treated. For example, the average time in remission for felines who have undergone treatment for small cell lymphoma in cats — such as in small cell gastrointestinal lymphoma — is about one to three years. That means that during this period, the signs and symptoms of cancer will have been greatly reduced or will have disappeared — i.e., decelerating the progression of this disease.

In comparison, cats with large cell gastrointestinal lymphoma who are treated with prednisolone alone may survive another 60 to 90 days. As stated earlier, the average life expectancy for cats who are given no treatment is about four weeks after their diagnosis.

As for solitary lymphoma, such as in the nasal cavity, the average life span for a cat after radiation treatment is about one to two years.

If you suspect your cat has lymphoma, contact your local PetCure Oncology center to speak with one of our caring team members. When it comes to this disease, it is important that your cat is diagnosed and treated as quickly as possible.