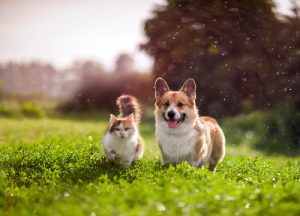 What Is Radiation Therapy?

At a very basic level, radiation therapy entails targeting cancer cells through the transmission of high-energy particles or waves that are directed at a tumor. At sufficiently high dosages, radiation can kill these cancer cells or at least significantly slow their growth. This often makes it the go-to treatment choice for cancers with an identifiable tumor that have not spread, and for which surgery would either be difficult or is not preferred for some other reason. There are also types of cancer for which radiation therapy is not ideal. For instance, lymphoma is typically a systemic cancer, and chemotherapy is the prevailing treatment option. However, radiation has been successfully used in cases of localized lymphoma, such as with nasal lymphoma.

Radiation therapy for pets may be designed to achieve different goals, from palliative measures to having a curative intent. Palliative radiation is more about improving quality of life but not necessarily the survival time of, for example, a dog. Lower doses of radiation and fewer treatments might be used with palliative radiation, reducing the overall toll on that pet. Risks of damaging surrounding tissues and organs is also reduced, and the impact of potential side effects is mitigated. In contrast, if the intent of radiation is curative, then a more aggressive radiation plan can be designed that provides the best chance of controlling the tumor or eradicating it entirely.

There are many factors that determine which treatment options are most suitable, including the type of cancer, the location of the mass, the size and stage of the tumor, whether the cancer has spread, and the dog or cat’s overall condition. Sometimes radiation is the only treatment recommended; other times it is paired with surgery or chemotherapy — or a combination of all three may be the best course of action.

What Does Radiation Therapy Entail?

There are two primary types of radiation therapy — conventionally fractionated radiation therapy (CFRT) and stereotactic radiosurgery (SRS). With CFRT, the total amount of radiation to be administrated is fractionated (divided), typically over 15 to 21 treatment sessions that are scheduled over the course of three to seven weeks. SRS is newer and far more innovative. With SRS, higher doses of radiation are delivered to tumors with submillimeter precision, increasing the chances of sparing surrounding healthy tissue. Only one to three treatments are needed, typically on consecutive days.

After a cancer diagnosis is confirmed and a consultation has taken place and the decision to proceed with radiation has been made, what radiation therapy for dogs and cats looks like for the pet owner is similar for both CFRT and SRS treatment protocols:

To better understand why precise targeting and positioning of the pet are necessary, take the case of a dog with a form of nasal cancer — a nasal chondrosarcoma. It there is an optic nerve adjacent to the tumor and as the lens of a dog’s eye being particularly sensitive to radiation, any imprecision would put the dog at risk of losing sight in at least one eye. Thanks to precision targeting and the locked-in positioning of the pet/patient, the risks to tissues and anatomical structures near the tumor are greatly minimized. In the absence of this targeted, precise form of radiation therapy — and the best chance for a cure — might not be considered as a viable treatment option for a case like this.

Other symptoms may appear depending on the site involved:

Typically, pets do not experience radiation therapy sickness as humans do (such as lethargy, general diarrhea or vomiting). With SRS, there is a miniscule amount of healthy tissue in the field; therefore, side effects tend to be much less common than with CFRT.

What Does Radiation Therapy Achieve?

Radiation therapy for cats and dogs aims to harm or kill cancerous cells. When veterinary oncologists recommend radiation, it’s because they believe it gives your pet the best chance to have a good quality of life and/or extended time with you. However, cancer is unpredictable, so there are no 100% guarantees. Treatment may cure your dog or cat, or it may give him or her a longer life — albeit with the possibility that the cancer eventually will return.

Based on data, oncologists can provide median timelines for how long a pet will benefit from radiation therapy. An example: If the median survival time after radiation for a particular type of cancer is 18 months, that means 50% of pets will pass on before that, and 50% live even longer. More encouraging is that once a pet clears that median, he or she might enjoy several more months or even a few more years with a high quality of life. What oncologists can’t do with as much certainty is pull an individual pet out of that data population and guarantee a more specific timeline. That’s because while radiation oncologists can determine the best dose and best targeting strategy for treating a tumor, sometimes the tumor doesn’t care — it’s going to do what it’s going to do regardless.

It’s also important to know that an individual pet’s response to radiation is not always immediately obvious. In a real-life example of another case of a dog with a nasal tumor, the tumor’s size was basically unchanged three months after radiation. However, that proved irrelevant over the longer haul: 18 months after treatment, no tumor was detectable. Thus, a veterinarian may advise a family to not despair in the absence of immediate good news — instead, prepare for a marathon rather than a sprint when it comes to knowing whether treatment worked.

While conventionally fractionated radiation therapy and stereotactic radiation share some procedural basics, there are some marked differences, which is why at times SRS is considered superior. Perhaps most important is that if a pet only faces one to three treatments instead of 15 or more, then he or she only has to experience a maximum of four anesthetic events (including the initial CT scan). This matters because anesthesia presents its own risks and burdens, the level of which are dependent on the dog or cat’s condition. Additionally, the submillimeter targeting precision that accompanies SRS technology increases the likelihood of significantly damaging the tumor while also significantly reducing the risk of side effects and the potential need for post-treatment management. Most notably, while the data is still maturing, some veterinary oncologists are comfortable saying that survival times with SRS are better than with traditional types of radiation for many types of tumors, and at least equivalent to survival times with other cancer types.

For families deciding between CRFT and SRS as treatment options, time, costs, the side effects, and the number of treatments/anesthetic events are typically the factors involved when trying to make a decision. With SRS, especially in major metropolitan areas where driving back and forth to treatments twice a day for a month is not palatable, is often the chosen option.

What Is the Cost of Radiation for Dogs and Cats?

As with any medical treatment, the cost is going to depend on myriad factors specific to each case. The cost of radiation therapy can range from $3,000 to $13,000. Many pet insurance companies cover at least a portion of cancer care, including traditional radiation therapy and stereotactic radiation (SRS/SRT) — but coverage likely will only be extended if you signed up for health insurance before a cancer diagnosis was made.

At PetCure Oncology, we also try to make it easier to cover the cost of radiation treatment in other ways: