Home / In The News / PetCure Oncology Launches into 2017 with Fifth Site, Clinical Trial

Chicago, IL – January 31, 2017 – With an extremely busy year on tap, PetCure Oncology kicked off 2017 in style with the opening of its fifth site last week, PetCure Oncology at PVSEC in Pittsburgh, Pennsylvania. 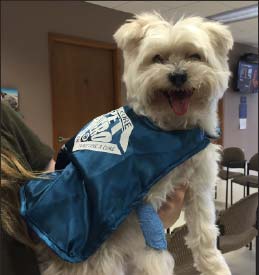 The national cancer care provider continues to redefine cancer care for pets by integrating stereotactic radiosurgery (SRS) into veterinary medicine. Now with five locations across the country, PetCure Oncology has made SRS accessible to pet owners in the southwest, midwest and east coast – with the west coast and south soon to come. Since the company launched in mid-2015, PetCure Oncology has quickly emerged as the leading provider of SRS for pets in terms of both patients treated and number of treatment centers. There are only 17 locations in the country capable of delivering SRS to pets, five of which are owned and operated by PetCure Oncology.

“We are very proud of the immense impact PetCure has made in such a short period of time,” said CEO Scott Milligan. “Just two years ago, mainstream accessibility to SRS for pets was just the hope of a frustrated pet parent. Now, it is a reality. We are immeasurably grateful for the way the veterinary community has embraced us, and we are humbled by the support that pet lovers everywhere have shown us.”

PetCure Oncology has now treated more than 600 pets with cancer, two-thirds of which have benefitted from SRS. That means that over 400 pet families elected to pursue the advanced form of radiation therapy, which has only recently become available to pets despite being a proven standard of care in human oncology. As PetCure continues to collect data related to outcomes and side effects, early results from pets treated with SRS are consistent with those found in human-focused studies.

“The advent of SRS, especially when delivered with VMAT technology, has truly changed the manner in which cancer care for pets can be delivered,” said Dr. Neal Mauldin, PetCure Oncology’s chief medical officer and a triple-board certified radiation oncologist. “We expected many pet owners to opt for SRS over conventional radiation therapy, but have seen a surprising number pursue SRS that would have otherwise elected euthanasia. The ability to treat previously ‘untreatable’ tumors with radiation therapy and the reduction in side effects are significant considerations for many pet owners.”

SRS is still relatively new to veterinary medicine, but has quickly become an ideal cancer treatment because it delivers radiation noninvasively with unprecedented precision. Benefits include fewer treatments, shorter treatment times, and minimal side effects.

PetCure Oncology is committed to continuing to develop and refine the role of SRS in cancer care for pets. Here are a few key initiatives to look out for: