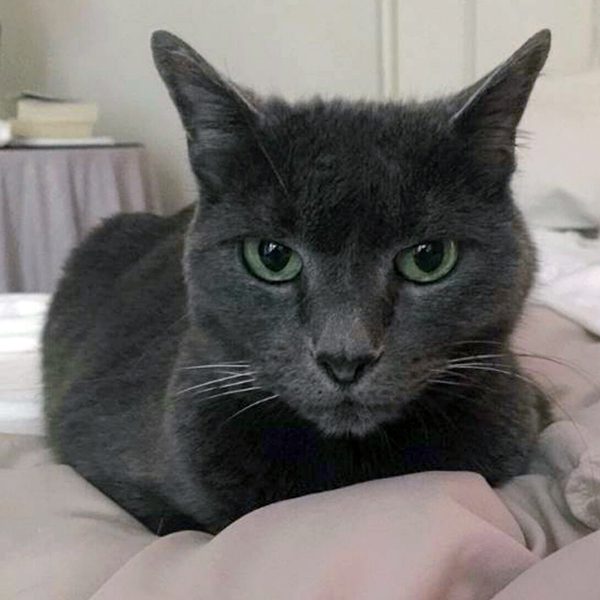 Eric, Toni, and their son, Alex Eggleton, are a proud cat-loving family from Indianapolis, Indiana. Their first family cat lived to 21 years old and passed away due to kidney failure. Six months later, they heard about two Russian blue mix kittens taken from a colony of feral cats that needed a home. So the Eggletons welcomed the 10-week-old Samantha and Shadow into their family in 2004.

In the summer of 2015, Toni noticed a change in Samantha’s behavior. Samantha seemed off-balance, and when she tried to jump she would miss more often than not. At first, Toni attributed the changes to old age. But several weeks later, she saw Samantha do something that was completely out of the norm. 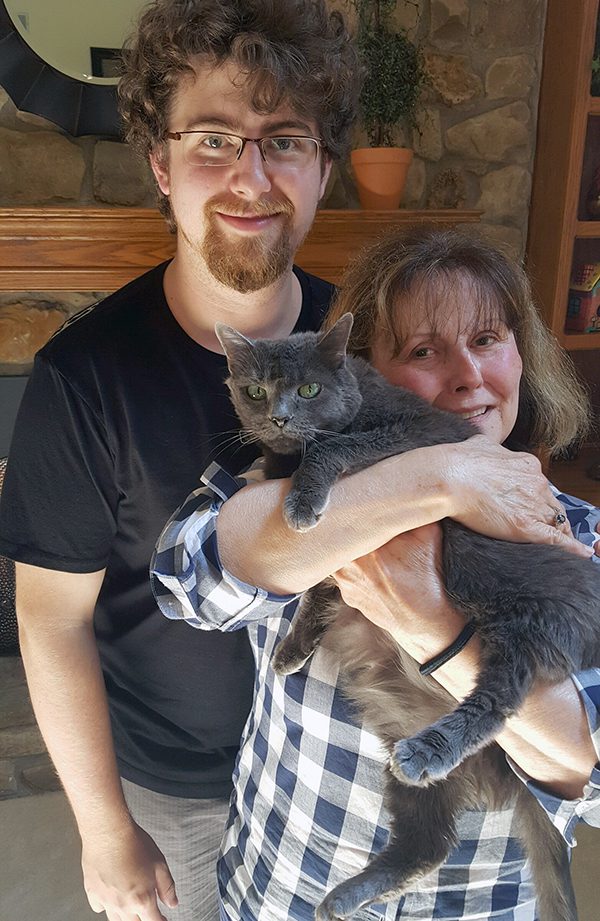 Toni and Alex Eggleton with Samantha

The Eggletons took Samantha to the veterinarian for evaluation. When her blood work came back with abnormal findings, they were referred to VCA Advanced Veterinary Care Center, where Samantha could be examined by a neurologist for further testing. An MRI showed a cystic mass. It was a large tumor that was pressing on the brain stem. The neurologist and radiation oncologist both agreed that the tumor was most likely meningioma, one of the most common brain tumors found in cats.

The tumor was especially dangerous due to the location and size of the lesion, and surgery was not a viable treatment option. Therefore, the Eggletons were given three options:

The family didn’t take long to decide to treat Samantha with SRS. They were not willing to sit by and do nothing, and conventional radiation therapy required too many sessions under anesthesia.

“We lost Shadow in 2014,” said Toni. “He had pancreatic cancer. We couldn’t save Shadow, and it really hurt to lose him. I had also lost my mom the same year we lost Shadow. To have Samantha sick a year later was devastating. But since it seemed like there was something we could do that would give her a better quality of life and a longer life, we had to do it.”

Samantha received three sessions of SRS from August 26 to 28, 2015, at PetCure Oncology at Care Center. By the end of the third day, the signs and symptoms Toni has previously observed were gone. And Samantha’s three-month post-treatment MRI revealed no evidence of the brainstem mass.

One year after SRS

It’s been a little over one year since Samantha received SRS for her brain tumor and she continues to do well.

“She is still with us,” said Toni. “She’s older – 12 years old now. She’s slowed down and gained a bit of weight. She does like her food! But she is the dearest, sweetest little thing and we just adore her. We love her so much and it’s just a very happy story. We still have her!”

The Eggletons have recently adopted two young male litter mates, Bobby and Banjo. As the big sister, Samantha made it very clear when they came home that she was the queen of the castle. And they seem to get that.

If you have a pet that has been diagnosed with cancer and you would like to know about treatment options, please contact a PetCure Oncology location near you. We are a happy to provide you with more information and assist you with scheduling a consultation. 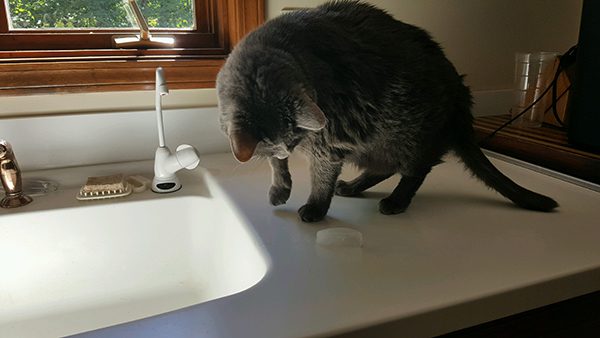 She shoots, she scores!