From the moment Roy’s parents, Katie and Jason, laid eyes on him they knew he was going to be a great addition to their family.

He was adopted about five years ago in Las Vegas, Nevada. He shares his home with two dog siblings named Millie and Max, as well as three cat siblings named Smudge, Olive and Tigger. He enjoys visits to grandma’s house, traveling to large cities, and belly rubs.

Roy’s mom knew something was wrong when she was giving Roy a bath and he did not want her to touch him to get him out. She recalls that he was especially aggressive which was unusual for him. On that same day some hours later, Roy had a petit mal seizure.

Katie took Roy to the vet that week where he was treated for a bad ear infection. He showed signs of improvement while on the medication for his ear infection but upon completion of the medication he was back to acting unlike himself. He was not as active and stopped doing the things he loved to do.

“He no longer seemed eager to jump on his window seat or the bed. He seemed nervous and did not always come when called,” she said.

Katie took Roy back to the vet where his reflexes were checked and learned he was showing no resistance in his front, right paw. He was then referred to a hospital where an MRI could be administered and it was found that he had a meningioma of about one inch in his frontal lobe.

Roy’s parents knew they needed to treat the cancer, but wanted to know all of their options. They stumbled upon PetCure Oncology and SRS/SRT while doing online research on radiation.  They learned that SRS/SRT could treat him in one or three radiation sessions which reduced the potential strain on Roy’s heart for the anesthesia. They knew that conventional radiation therapy would likely have needed three to four times the anesthetic events in comparison.

Roy was treated at PetCure Oncology at Arizona Veterinary Oncology with Dr. Eric Boshoven. He received three fractions of stereotactic radiation and tolerated the treatment well. 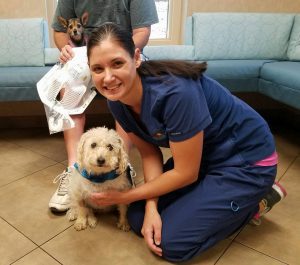 “The staff at PetCure Oncology are AMAZING! From the minute we walked in the door, Roy was treated like family,” Katie said.

Roy received a Pet Hero cape following treatment, but the PetCure Oncology team surprised him by providing one for each of his siblings too.

After his 3 ½ month check-up, it was found that his tumor had shrunk almost in half.

Roy’s family is thrilled and staying hopeful about his tumor shrinkage. Post-treatment, Roy spends much of his time sleeping in his parents’ bed at night, enjoying time with his siblings and posing for photos for the photo album his mom made  called “Roy Pollard: Me and My Friends.”

“Roy is still loving life everyday – 7 months after diagnosis. At 7 months, we have seen no side effects directly from the radiation. He still gets a chance to sleep next to us in bed with mom and dad every night because SRS has allowed him to be a dog for little bit longer. 7 months and going strong, where the alternative would have been unspeakable.”

Upon his 10 month check-up it was found that the tumor was still shrinking and had gone down to less than a quarter of its original size.