Home / In The News / Pet Hero: Bindi the Rescue Dog 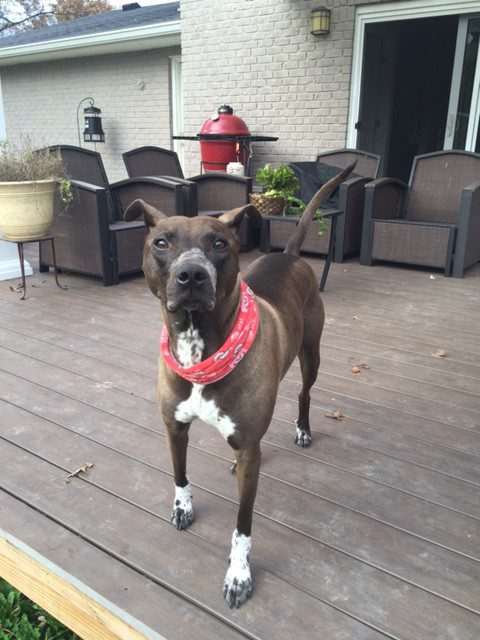 Bindi, a 4-year old rescue and canine cancer survivor, has an interesting pedigree. DNA testing shows her mother to be an Australian Koolie and her dad to be a Golden Retriever and American Bulldog mix. Bindi’s Golden Retriever genes might have played a role in her cancer diagnosis.

When the Hussey family adopted Bindi in December of 2014 she had a small bump on the bridge of her nose. Over time the bump grew in size and the family took her to see their local veterinarian. A biopsy confirmed a mast cell tumor. Due to the location of the tumor, surgery was not an option and traditional radiation too risky. Together, her human dad Mack Hussey, their local neighborhood veterinarian and the team at Care Center decided stereotactic radiosurgery (SRS) was the best treatment option for Bindi.

In August of 2015 Bindi received SRS treatment for the mast cell tumor on her nose. SRS is unlike other care options in that it treats the patient with the intent to cure cancer, providing hope to pet families. This differentiation was especially important to Bindi’s dad Mack, he shares, “I love this dog so much. When they told me about the curative intent I knew this was the answer for Bindi.”

Three days after treatment, the bump on Bindi’s nose had significantly decreased in size and has continued to get smaller over time. Today Bindi is doing well, the small amount of hair she lost on her nose has gown back and she’s the happy dog the Hussey family rescued nearly a year ago.

Bindi was treated at PetCure Oncology at Care Center in Cincinnati, Ohio.

Hear from Mack and Bindi Hussey from PetCure Oncology on Vimeo.