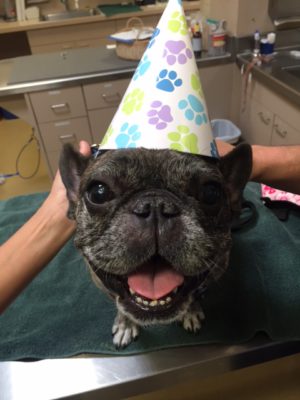 Gilbert, AZ – May 5, 2016 – As the world celebrates National Brain Tumor Awareness Month this May, brain tumor survivor Calvin, an eight-year-old canine belonging to Gretchen and David May of Scottsdale, is happily playing with his favorite toy “crunchy bone” and chasing his French Bulldog sister Olive around the house.

Not long ago, such a scene seemed impossible. But thanks to revolutionary advancements in veterinary medicine and a new treatment option called stereotactic radiosurgery (SRS), Calvin is happy, healthy and living life to the fullest.

“He’s our little miracle dog,” said Gretchen. “Calvin and Olive are our kids. We would do anything for them. We feel incredibly lucky that we had access to SRS here in Arizona.”

Already proven successful in human medicine, SRS is now available for pets and providing newfound hope in the fight against cancer. In addition to being delivered with the intent to cure, rather than merely ease the symptoms of cancer, the significant benefits of SRS include:

Calvin’s survivor story began on a Sunday afternoon last September when Gretchen noticed Calvin having a seizure. He was shaking and foaming at the mouth. A trip to the emergency room for overnight observation was followed by a visit to his primary care veterinarian, Travis Nick, DVM, of Scottsdale Ranch Animal Hospital, for evaluation. After some preliminary testing, Calvin was referred to a veterinary neurologist, Jason Evans, MS, DVM, DACVIM (Neurology), at Veterinary Neurological Center in Phoenix, Arizona. There, MRI results revealed that Calvin had a malignant brain tumor.

Dr. Evans referred the Mays to PetCure Oncology at Arizona Veterinary Oncology (AVO) in Gilbert, Arizona for further evaluation by board-certified radiation oncologist Eric Boshoven, DVM, DACVR (RO). After reviewing Calvin’s history and performing a comprehensive exam, Dr. Boshoven walked the Mays through all of their available treatment options. Ultimately, he recommended treating the tumor with SRS rather than surgery or chemotherapy.

“Calvin successfully completed three SRS sessions,” said Dr. Boshoven. “He suffered a small seizure after his first treatment but none since. Aside from experiencing a slight lightening of his coat, he has had no side effects. An MRI at four months post-treatment showed virtually no sign of the tumor.” 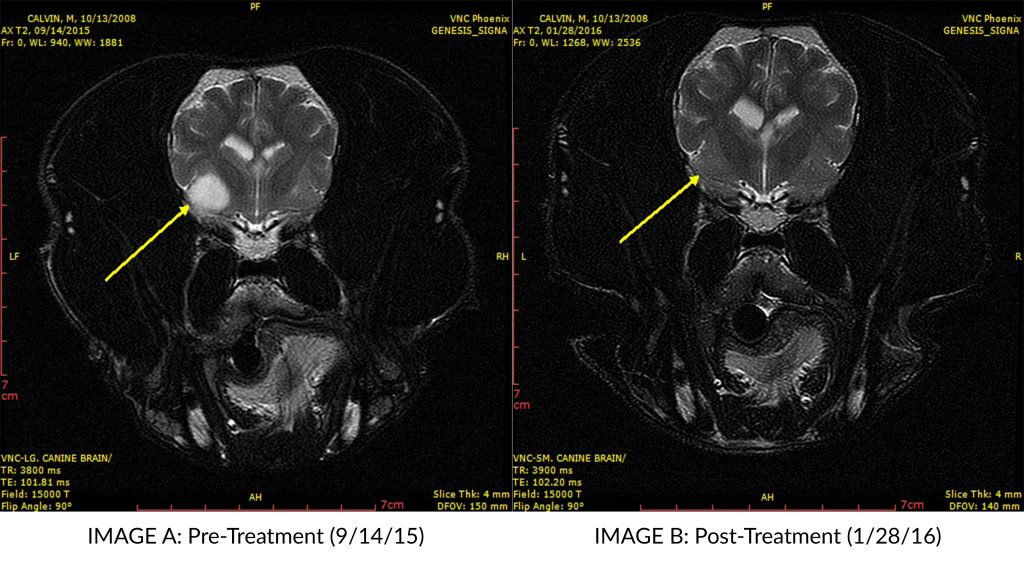 Seizures are the most common indication of brain tumors in dogs. Other symptoms may include unusual behavior or temperament, vision problems, movement in circles, uncoordinated movement, unsteady gait, lack of appetite, inappropriate urination and/or lethargy. While brain tumors in cats are less common, they may display the same symptoms as dogs along with head pressing and unusual meowing.